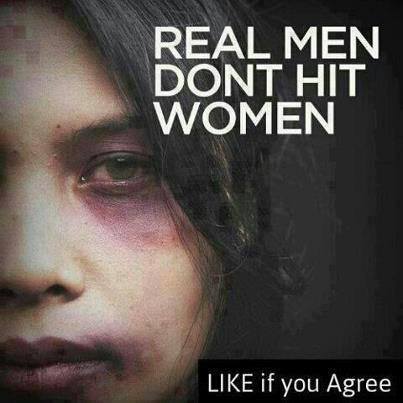 You may have seen this (and memes like it) going around your favorite social media site or where ever. I understand the reasoning, to condemn the violence against women. It is a worthy cause.

But I disagree with THIS particular meme, as it sets up a potential double standard. An unspoken one that goes with this, is the false assumption that the male will always be the instigator of violence.

Abuse is never right. And I know that since males tend to be the more dominant ones in the relationship, they are more likley to be abusive then the reverse. But this is not an absolute rule.

Though largely unheard (partly BECAUSE of this double standard!), females can be abusive to males. These little meme sends a message that, no matter what, a women is sacred, and should never be hit.

Self defense is justified in any situation of abuse.

Its time to get rid of this double standard, and the everlasting stigmas (eg: a man who is abused by a women is weak) that just perpetuate this form of abuse further.

Abuse in ANY form, is terrible. If you are favoring one form of abuse, but willfully ignoring another because of bias, you are not helping the situation.

View all posts by mbman

This site uses Akismet to reduce spam. Learn how your comment data is processed.